The Twenty-Second United States Census, known as Census 2000 and conducted by the Census Bureau, determined the resident population of the United States on April 1, 2000, to be 281,421,906, an increase of 13.2% over the 248,709,873 persons enumerated during the 1990 Census.[1] This was the twenty-second federal census and the largest single civil administrative peacetime effort in the history of the United States.[2]

The U.S. resident population includes the total number of people in the 50 states and the District of Columbia. The Bureau also enumerated the residents of the Commonwealth of Puerto Rico; its population was 3,808,610, an 8.1% increase over the number from a decade earlier. 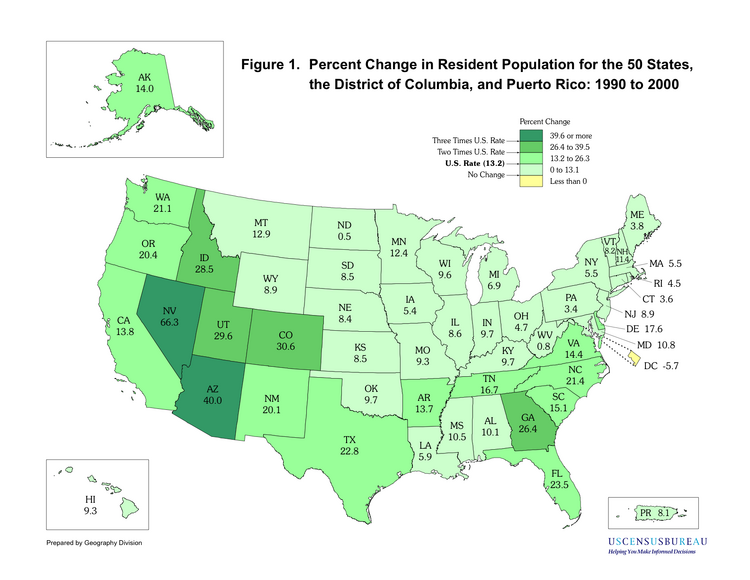 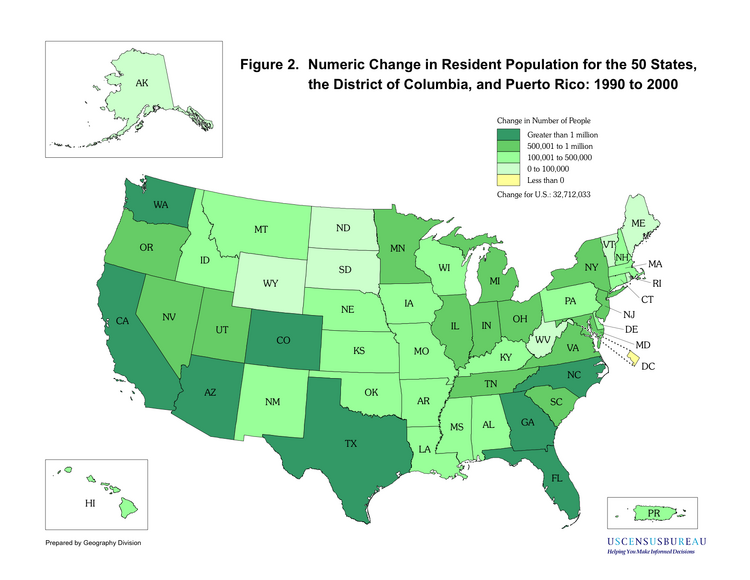 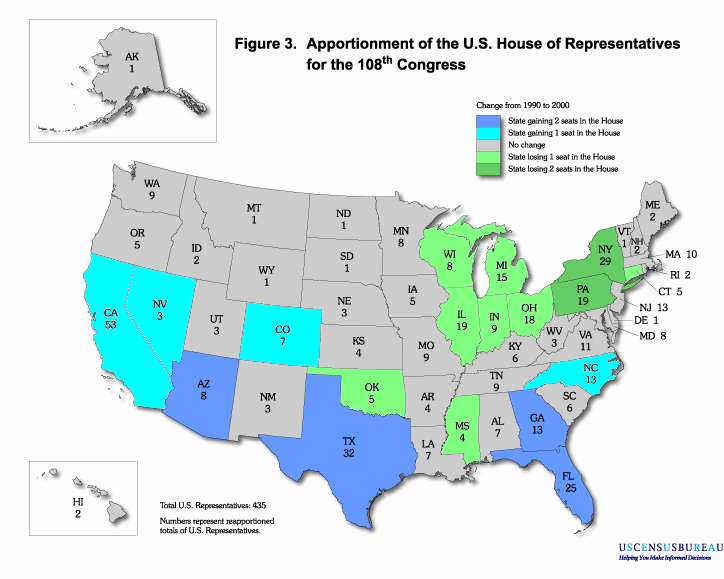 The results of the census are used to determine how many congressional districts each state is apportioned. Congress defines the formula, in accordance with Title 2 of the U.S. Code, to reapportion among the states the 435 seats in the United States House of Representatives. The apportionment population consists of the resident population of the fifty states, plus the overseas military and federal civilian employees and their dependents living with them who could be allocated to a state. Each member of the House represents a population of about 647,000. The populations of the District of Columbia and Puerto Rico are excluded from the apportionment population because they do not have voting seats in the U. S. House of Representatives.[3]

Since the first census in 1790, the decennial count has been the basis for the United States representative form of government. Article I, Section II specifies that "The Number of Representatives shall not exceed one for every thirty Thousand, but each State shall have at Least one Representative." In 1790, each member of the House represented about 34,000 residents. Since then, the House more than quadrupled in size, and in 1911 the number of representatives was fixed at 435. Today, each member represents about 19 times as many constituents.

In the 2000 Census, Michigan lost one seat in the House of Representatives.

In the years leading up to the 2000 census, there was substantial controversy over whether the Bureau should adjust census figures based on a follow-up survey, called the post-enumeration survey, of a sample of blocks. (In 1999, the Supreme Court ruled 5-4 that the Constitution prohibits the use of such figures for apportionment purposes, but it may be permissible for other purposes where feasible.) The controversy was partly technical, but also partly political, since based on data from the 1990 census both parties believed that adjustment would likely have the effect, after redistricting, of slightly increasing Democratic representation in legislative bodies, but would also give Utah an additional, probably Republican, representative to Congress. (See here and here for background.)

Following the census, discrepancies between the adjusted census figures and demographic estimates of population change could not be resolved in time to meet legal deadlines for the provision of redistricting data, and the Census Bureau therefore recommended that the unadjusted results be used for this purpose. This recommendation was followed by the Secretary of Commerce (the official in charge of making the determination).

Retrieved from "https://michigan.fandom.com/wiki/United_States_2000_Census?oldid=2071"
Community content is available under CC-BY-SA unless otherwise noted.